In our last blog, I introduced Integral Theory, a meta-theory by Ken Wilber. His AQAL model and acronym include five elements: (four) quadrants, levels, lines, states, and types. As detailed in that last blog, each quadrant focuses our attention to observe and influence modes of inquiry.

This blog further distinguishes the Quadrants of Integral Theory and applies it to Learning and Leadership: two areas of development that impact organizational life today that might benefit from an integral perceptive.

2- Levels involve stage development, which offers the “structures of awareness,” or vertical development such as mindsets or attitudes. Each level embraces the previous level to expand structures to include more variables and complexity. 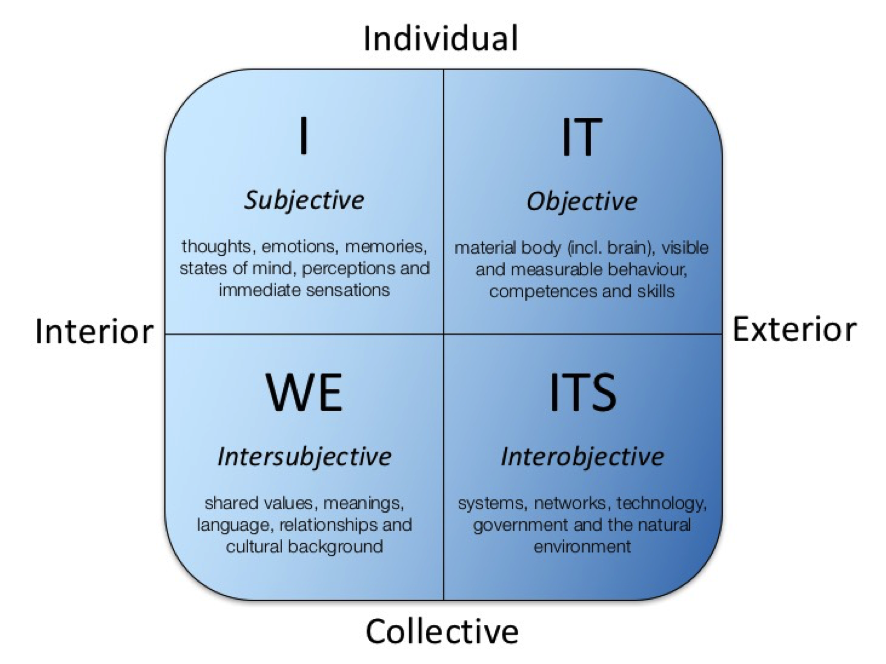 For Wilber, reality — all phenomenon — is not composed of things or processes, but of holons, which are wholes that are simultaneously parts of other wholes (whole/parts). This is true in the way a word is both, whole, onto itself, and part of a sentence; and that, a sentence is also whole, and part of a paragraph, and so on. The four quadrants reveal four dimensions of a holon (whole/part) when observing phenomenon and solutions.

Specifically, in our last blog, we explored how, businesses and leaders today, confuse the parts with the whole. For instance, how many conflate cultural awareness or lower left issues with lower right societal concerns or solutions. As a public policy example, police departments across the nation opted to deal with left-side concerns about police brutality by:

… rather than dealing with the racial fears (upper left)

Indeed, businesses are also being called to respond to issues emerging from the lower left cultural quadrant:

Each of these situations resulted not from poor revenue, bad ratings, low profit or lack of productivity. These right-side issues were trumped by left-side values and concerns, catching boardrooms and executives off-guard.

This blog further distinguishes the Quadrants of Integral Theory and applies it to Learning and Leadership.

Learning can be most pernicious, as most educational institutions have designed learning from the right-side perspective of studying, teaching, and investigating. That perspective limits us to facts and evidence from empirical observations, which in business translates to researching, acquiring and managing knowledge.

But knowledge is more fungible and accessible now than ever before. We require a framework that expands beyond knowing to increase capacity in learning.

With regard to learning, I offer this AQAL view that integrates our research in these areas:

This quadrant increases capacity. I embody learning and self-discovery through inquiry. Through increased awareness, I engage in contemplative inquiry, critical reflection, and somatic discovery.

The focus is on whether I am grounded: open to possibility, now, and present to my intention? Or, am I reacting to the past or anticipating the future?

This quadrant studies content. I study concepts and research knowledge to produce results. Through study, I engage in skillful action, practical application, and active observation.

The focus is on whether I am focused on distractions or study.

This quadrant discovers practices. We experience learning via deepening and uplifting engagements. Through discovery, we understand through connected encounters, perspectival embrace, and ethical participation.

This quadrant processes knowledge. Technology and systems can improve how we learn together via efforts such as STEM, gamification, systems, and scenarios.

We share knowledge through connections enabled by processes, systems, and technology. 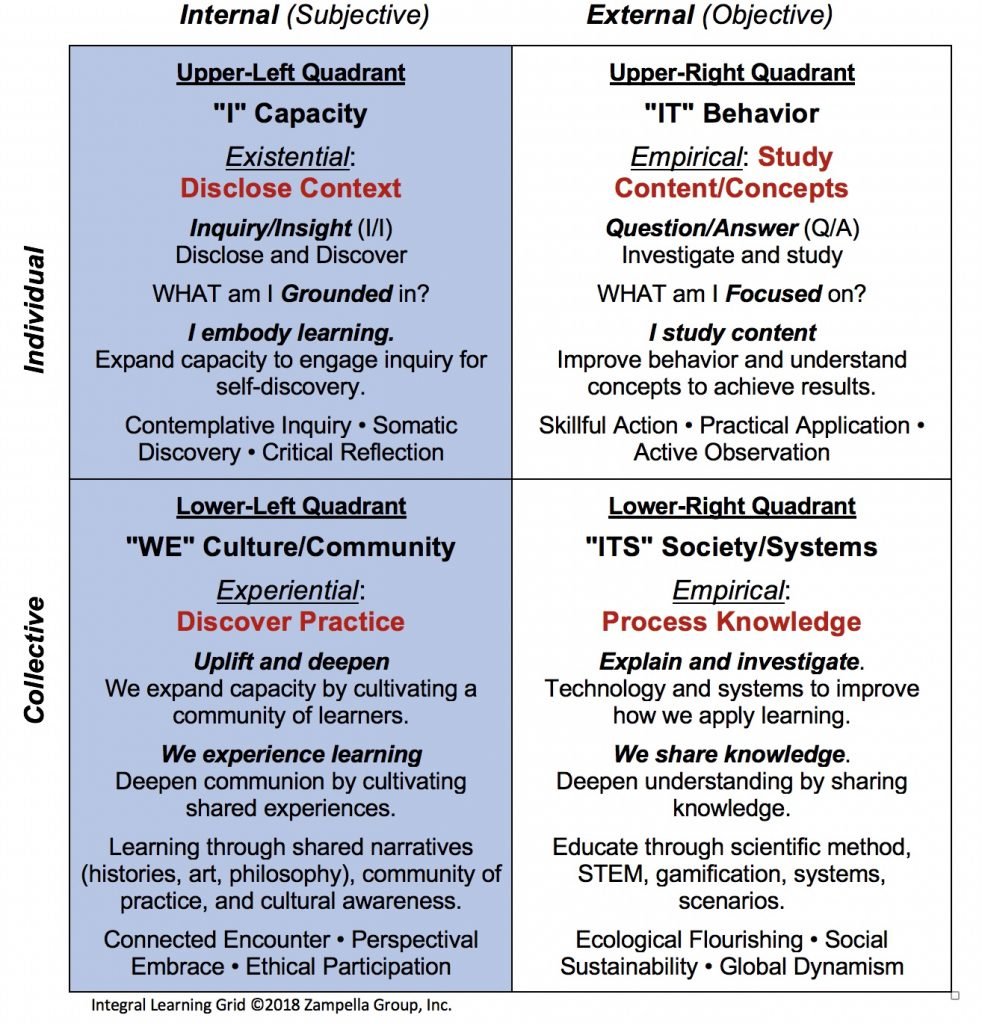 Learning challenges that emerge often do so from confusion between left- and right-side observations and solutions. We tend to notice the emergence of right-side issues and assume they require right-side solutions.

For instance, if students drop out of school or if employees lack competency, we tend to seek out content, tools, or systems to solve these issues. This is automatic because we are inclined toward progress; we constantly feel the need for new tools, better content, or bigger systems.

When developing learning programs or working with learning specialists, we automatically lean toward these right-side solutions. Many of them involve STEM, empirical, and practical solutions that manage conditions at the expense of left-side phenomena and discoveries that involve values and practices that deepen culture.

As a guiding principle, the right side explores tools to improve behavior and systems that increase productivity, and the left side explores values that cultivate belonging and practices that deepen culture.

The inquiry into learning also impacts how we view leading, leaders, and leadership. Expanding or developing these capabilities involves challenging observations, discoveries, and solutions precisely because most experts, executives, and learning specialists focus on the right-side perspective, limiting us to facts and evidence from empirical observations.

Researcher Russ Volckmann, the publisher and editor of Integral Leadership Review, explores the strength each quadrant contributes to an integral learning experience.

With regard to leading and leadership, I offer this AQAL view:

This quadrant discloses consciousness or levels of awareness. Interventions address who I am (as a leader) by questioning values and beliefs and inquiring into attitudes, possibilities, intention, and thinking. With practice, I expand awareness to develop perspective.

This quadrant improves competency. Interventions address how I perform (as a leader) by expanding skills and improving actions, performance, and accountability. With training, I improve behavior and expand knowledge. 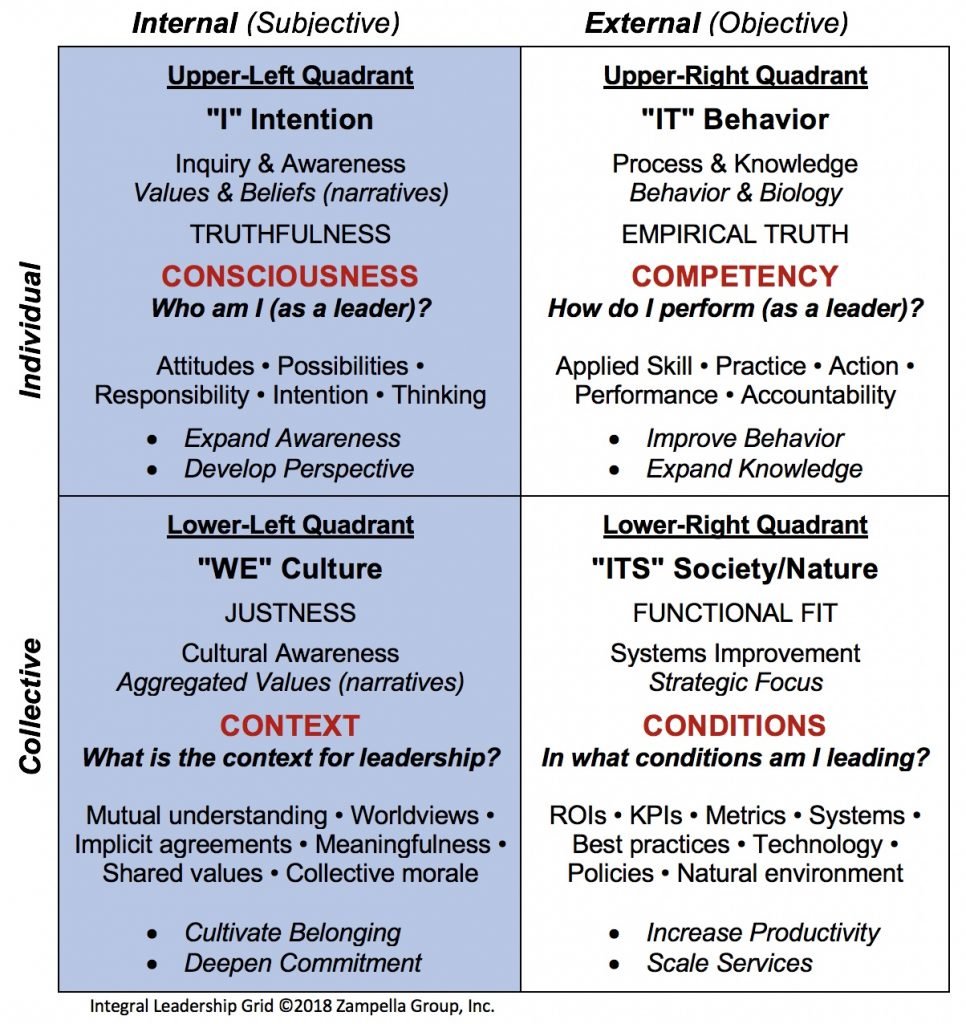 When examining the needs of organizational life, we view the lower half of the quadrants as most business executives do: relying solely on lower-right solutions. They understand success through measures such as behavior modification via skills and technology to increase performance (ROI, KPIs, and productivity measures).

This reveals a leadership blind spot in the lower left, which encompasses attitudes, mindsets, and values that inform and form culture beyond data and metrics. For instance,

The dilemma for developing leaders and cultivating leadership development resides in all four quadrants.

Leadership involves the role (leader), the behaviors and worldviews—including beliefs, intentions, and the like—(leading), and the context (systems and culture). In a world of fungible knowledge, volatile change, and increasing complexity and ambiguity, leadership ventures beyond Hersey’s and Blanchard’s (1969) notions of situations and situational contexts.

An integral context includes awareness and culture as well as systems, processes, technologies, and so on. Thus, the term leadership refers to the gestalt of bio-psycho-social-cultural-spiritual phenomena in which many variables are played out in the service of generating or altering contexts for some accomplishment, even if that involves creating a calm presence in the face of challenges.

Leadership development today expands our view beyond the right side, to involve the upper left “awareness” view, to cultivate the lower left “context” view, to expand culture by deepening belonging and commitment.

Much of our work to expand human potential and to develop leaders and leadership require new views of humans, organizational life, and change. Integral theory and the AQAL model comprise more than the four quadrants—to include levels, lines, states, and types—but there’s no place better to begin.

Expanding our view beyond the right side is a worthy effort to open to wholeness in everyday life.

Typically, with my blog posts, I share thoughts and ideas about learning and leadership without tying them back to our firm. I will just make this rare point. Our firm employs an Ontological Inquiry with Integral Theory and Contemplative Practice for the sole purpose of working with coaches, L&D professionals, and executives to expand mindsets to include the left side of the AQAL model.

We’ve engaged in this level of development because of the times we find ourselves. Today, adult learning must achieve more than mere training for competencies. We must create a meta-learning framework that allows for expanding awareness, integrating new insights and complexities, and engaging practices that sustain continuous learning.