2017 began with a Women’s March, which poured half a million citizens into our nation’s capital, with 408 simultaneous marches nationwide and another 168 in 81 countries. It’s clear that these scenes empowered and awakened many. And to celebrate its first year anniversary this week, we witnessed more than 2 million women and supporters marching again in 700 cities worldwide.

Shortly after last year’s march, I wrote a blog post titled “Uber Crashes into the Third Wave,” which detailed our cultural shifts in organizational life. Among the dirt facing their bad boy CEO was the fact that Uber’s executives had white-washed sexual assault accusations by former engineer Susan Fowler because the accused perpetrator “was a high performer.” 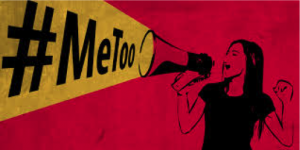 Then in April, Google fired engineer, James Damore, who wrote this memo questioning the presence of women in tech.

This all seems so quaint today in the wake of the resignations of Uber CEO Travis Kalanick, sexual assault allegations against Harvey Weinstein, and the resignation of dozens of men from the fields of entertainment, business, news, and politics.

The #MeToo moment became a movement. Women were now, finally, being heard and speaking up.

Since 1999, I’ve taught college leadership courses in business schools. Such graduate and undergraduate courses as Leadership, Communications, Ethics, Organizational Behavior, and Strategic Planning all have hidden in their design deceptively masculine assumptions, many of which can be found in Damore’s memo.

Some of these assumptions rest on the frail female theory (yes, I created that), espoused in Damore’s memo, “that women are less interested in high-stress jobs because they are more anxious” and that they are less outwardly ambitious.

Geez, I wonder what women have to be anxious about with bosses like James Damore or Harvey Weinstein relegating them to servile status.

I know many men that might embrace some of these values if they could, but our business ethos is drawn from assumptions predicated on our concepts of leadership, which are all derived from patriarchy. Strong leaders are loud, proud, tough, bold, and strong; they always have the answer, always know the questions, and always come to the rescue.

We honor those who celebrate themselves—the Jack Welches and Lee Iacoccas who loudly boast their assets and rarely credit others. Or we adore the bad boys, such as Mark Zuckerberg, Sean Parker, or Travis Kalanick, who mythically channel sheer masculine genius to make our lives go faster, harder, smarter.

Indeed, Silicon Valley has had two decades to mold our notions of success and leadership. Its versions of these idolize a brand that sounds more like sex than leadership: we start firm, pound hard, flip fast, and cash out.

As a researcher and educator, what I find most frustrating, as we move to expand leadership beyond the heroic or Alpha male model, has been how stuck we are. Even when we include more women in classes, training programs, and boardrooms, the message is clear: buck up, walk tall, and assert yourself; that is, be tough like a man.

This is the recipe for getting ahead. We may tame it, but it still exists as our primary frame of reference. It is baked into our American ideals about who and what we are.

Business, Leadership, and the Masculine Worldview

Sociologist Geert Hofstede, whose cultural dimensions theory, formulated in 1965, surveyed national views worldwide on a spectrum of four dimensions, two of which were individualism and collectivism, and masculinity-femininity. This theory informs much of our society, education, and models of leadership and success. See our blog on this dynamic. 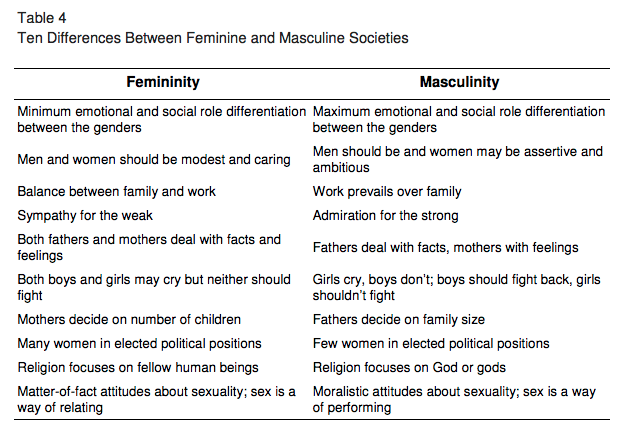 In this masculine-feminine dimension (see table 4 above), masculinity is defined as “a preference in society for achievement, heroism, assertiveness, and material rewards for success.” Masculine societies are driven by competition and achievement, with success defined by the “winner” or “best in the field”— an “everyone-out-for-himself mentality.” Feminine societies are marked by caring for others, quality of life, and the definition of success as liking our work.

For instance, take our national priorities: We stress military strength and economics (masculine) in government and business and relegate soft skills and soft power in business and government (feminine) to second-tier status.

Hofstede’s theory reveals America’s individualistic-masculine society, which has shaped our expectations and assumptions about leaders and leadership. Then comes Star Wars: The Last Jedi. Candidly, The Last Jedi isn’t my favorite of the franchise, but something brought me back for a second viewing—the women.

Star Wars manages to do what we in business, education, and leadership development have rarely accomplished: it shows women leading with women as women. The women in this flick take on a new center of gravity with different priorities.

Success is less about heroic feats of brute force and more about the force of “women who occupy student/learner positions,” says Annalise Ophelian, documentary film-maker, and psychologist. Ophelian notes that The Last Jedi also contains the “first truly Bechdel Test passing scene” in the history of the franchise. The Bechdel–Wallace test, which indicates female agency and independence, first appeared in 1985 and sets out three criteria that a film should meet: it has to 1) have at least two women in it, 2) who talk to each other 3) about something besides a man.

Ophelian contends that “female heroes are traditionally presented in cinematic isolation. This film gives us women working side by side, women in technical positions, and of course women learning the ways of the Force.”

Women’s Leadership in a Galaxy Far Away

The strong leadership demonstrated by Princess Leia and Vice Admiral Holdo were more impressive to me than lightsaber-rattling Rey. I was stunned that any franchise would actually reveal women in power without portraying them as brutish. As I enjoyed the scenes, I could also see the predictable backlash (see below).

After all, we have a president of this great land who exhibits, for all to see, how threatened he is by strong women.

Some of the classic scenes and lines between Princess Leia and Vice Admiral Holdo include the following:

Predictably, the backlash boiled over in online venues. Rotten Tomatoes had an influx of bad reviews (contrary to the movie’s reviews and tickets sales) and Twitter responses focused on the fact that the film’s strongest characters are almost all women.

It had some great graphics … but subjecting myself and my children to every bad guy being a man and all of the commanders being women, like seven deep, like, ‘This commander dies, so it’s this woman and then it’s this woman,’ … And it’s all about women in the chain of command. Beat me over the head.

Just last week, an anti-feminist Star Wars fan made his own “chauvinist cut” of the film by removing every woman who appears on screen. This 46-minute version, which appears on a video sharing site, is titled The Last Jedi: De-Feminized Fanedit (aka The Chauvinist Cut). 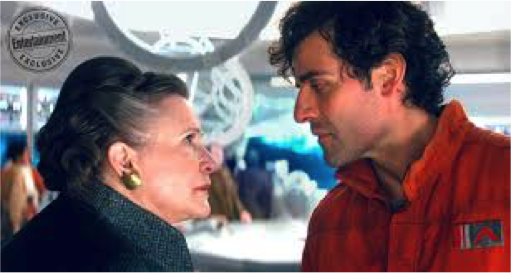 Bad boys are usually fond of smugly asserting their right to disrupt society. In every field and venture, they topple the norms in the name of profit and progress.

Well, guys, if you really want to disrupt business, put a woman in charge; hell, fill most of your C-Suite with women. I promise a disruption that will pop your boy bubble.

As we look ahead, a backlash seems a necessary phase. We will face clever ways for Alpha males to assert their force as this last gasping cultural lag clutches for dear life.

The Force in Star Wars, however, bookended what may be the most important movement for men. That’s right, for men! We’ve been invited to wake up, join in, and learn to share power. If any doubt remains, take a second look at Oprah’s recent nine-minute speech at the 75th Annual Golden Globes that shook our conscience.

It’s our chance, guys, to declare proudly, “Time’s up!”