Star Trek #2: Out of this World Diversity

Star Trek #2: Out of this World Diversity

Launched 50 years ago, Star Trek offered a view of humanity’s future often influencing the many challenges we face today. My last post explored leadership as it evolved over its five series. In this post, I use the Trek Universe to explore gender and diversity as well as cultural worldviews. As Learning and Development (L & D) specialists, Star Trek offers important narratives on these issues, while revealing the challenges of integrating race, culture, (as species) and technology into society.

We begin with the role of women as part of the story to a key factor in driving the action. 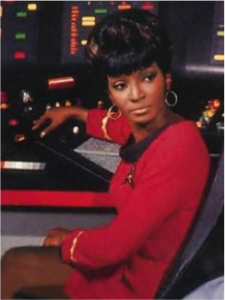 The Original Series (TOS): 1966-69. On Kirk’s Enterprise, Lt. Uhura was the sole female regular. As communications officer, her role was more important symbolically than was its impact on the series. It held minimal influence in each mission or episode.

The role outlived the series because of actor Nichelle Nichols, as she came to reflect racial issues of our time more than gender issues in the future. (More on Nichols later).

Women have not always fared well on many of the series, as described in “15 Really Terrible Moments For Women In Star Trek.”

The Next Generation (TNG): 1987-94. By Captain Picard’s time, women gained both in numbers and influence. Chief Medical Officer, Beverly Crusher commanded from sickbay, the bridge, and on missions with knowledge, empathy, and skill.

Counselor Deanna Troi often influenced Picard and other officers on personal and leadership matters, challenging and influencing direction. Her soft power offered the psychological connective-tissue that supported and at times challenged the crew. Guinan was a wise voice employed sparingly but always impactful both to Picard and to officers who required insight and direction. Whoopi Goldberg’s Guinan often compelled Picard to trust her unique wisdom. 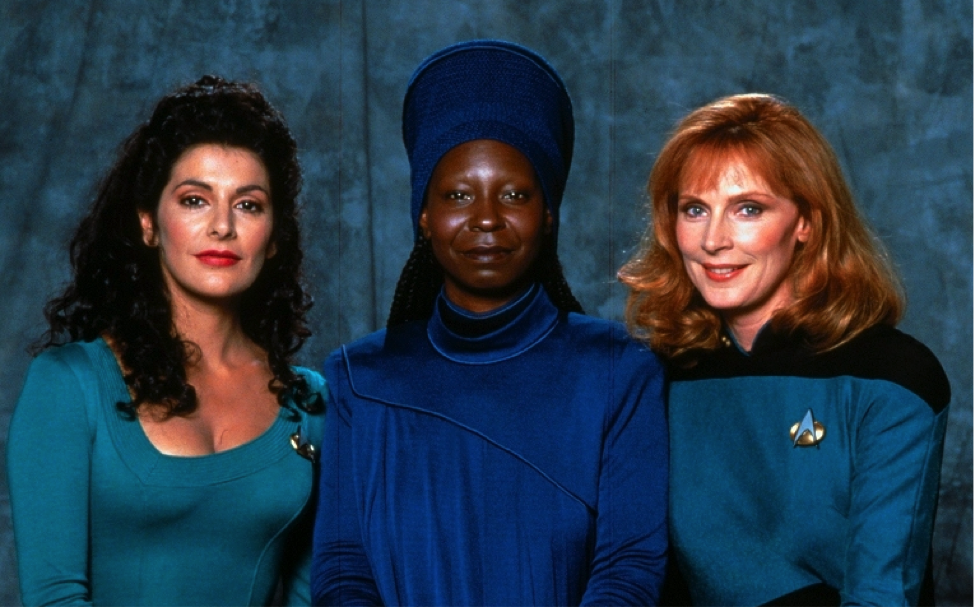 Most importantly, TNG reflected women of authority and power. Close to half the admirals on this series were female. Female Klingons, Betazoid, Romulans, Cardassian or other species were as cunning and clever as any male friend or foe.

Jadzia Dax is joined with a multigenerational symbiont Trill species who has acquired incredible skill and knowledge over several lifetimes. Where Kira challenges authority, Dax influences it and enjoys a long-time personal relationship with Sisko.

Voyager: 1995-2001. Voyager is the series that turns the tables on stereotypical roles. The leading females in this series challenge every male-borne convention on power, leadership, villains, and positions. Catherine Janeway assumes the Captain’s chair, B’Elanna Torres, become Chief Engineer, and Seven of Nine assumes a former Borg, the bad-ass villain in Trek lore, who is reverting to her human self.

Enterprise: 2001-05. This prequel occurs a century before The Original Series (TOS). The conundrum: While existing 100 years before TOS, it airs four decades after TOS. The balance is awkward at times. To wit: The males in this series reveal a more evolved relationship with females than do those on TOS (a century later).

The Vulcan, T’Pol, begins as a science officer sent by Vulcan to chaperone Captain Archer’s maiden voyage, then becomes a member of the crew. Initially, she questions the human instinct but soon grows as a wise leader of this crew.

In each Trek series, one character represented an “outsider’s” view of what it means to be human. These “outsiders” were the marginal, marginalized, or unique, trying to reconcile different realities against humanity’s norms. In each series, the outsider explored the ideals and limitations of humanity as they struggled to belong. 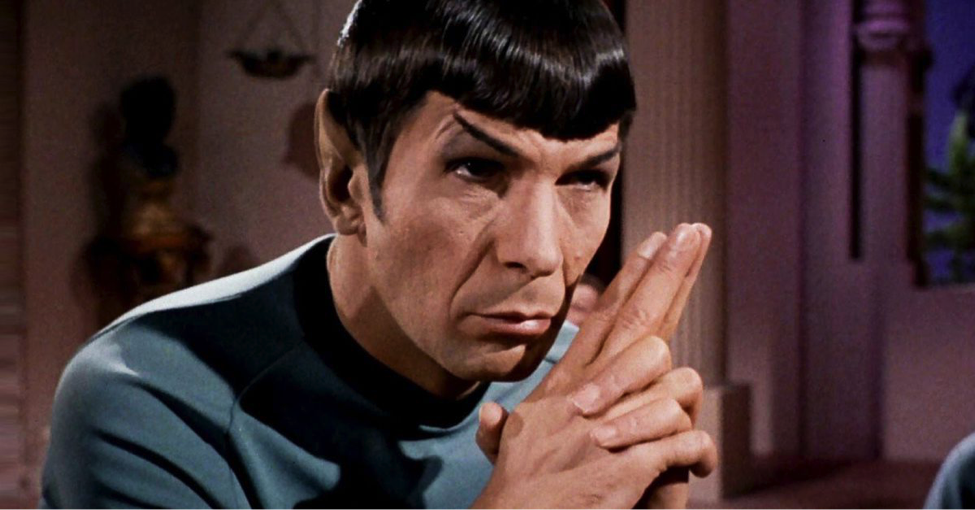 Spock as the first officer on Kirk’s original Enterprise (TOS) develops the Outsider Template: revealing, through his examination, what it means to be human. The half-human, half-Vulcan Spock dwelled in reconciling these two halves between emotion and logic, and in the process questioned humanity’s many contradictions.

Spock became more fully integrated through the Trek big-screen movie arc of Wrath of Kahn, Search for Spock, and The Voyage Home. On TNG and in the reboots, “Ambassador” Spock reveals an integrated being, less concerned about “emotions” with a Zen-like clarity and purpose. 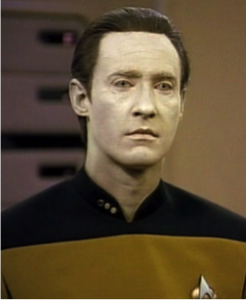 Data is the unique artificial life form serving aboard Captain Picard’s Enterprise (TNG) that raises Spock’s template of becoming human to another plane: To reconcile artificial intelligence with life. In his quest to become human, Data whimsically explores the taken-for-granted aspects of humanity: humor, laughter, birthdays, kindness, and emotions such as anger and pleasure. He also grapples with larger issues such as life, love, ethics, and free will to reveal what’s most important.

I must confess, Data is a personal favorite. His approach to inquiry emulates a childlike wonder and refreshing humility. He explores his abilities and limitations in ways that often expresses more humanity than his crew mates. These episodes offer a view into data’s world: Measure of a Man, Data’s Day, The Quality of Life 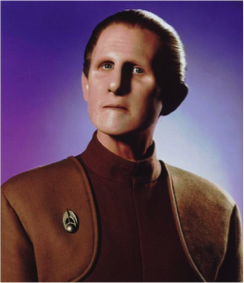 Odo is a shapeshifter (Changeling) and DS9’s security chief, who deepens the Spock Template by reconciling worlds between solids (bodily forms) and formless beings. In this way, his presence – misunderstood and confusing – often reveals the bigotry that can surface when we do not understand.

Odo’s efforts are often personal and deeply felt in solitude and quiet desperation as he observes and questions humanity’s darker motives. Some of his struggles are revealed in these episodes Heart of Stone, The Forsaken, The Search Part II, and Chimera. 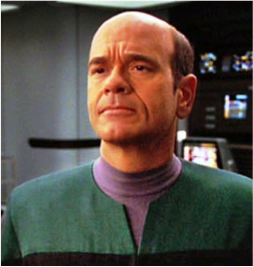 EMH Doctor is Voyager’s Emergency Medical Hologram, essentially a computerized tool to assist in medical emergencies. When Voyager was thrust 70,000 light years from home and lost its Chief Medical Officer, the EMH was activated into permanent duty. This presented a dilemma to Voyager’s crew and upended the Spock Template.

Unlike Data, The EMH was programmed as a tool, to engage a specific task (medical), and confined to space (sickbay), whereas Data was created to emulate humans.

The EMH’s challenge is to get the crew to experience him as an individual, understand his unique needs, and then to accept him as a member of the crew. This delicate balance between the purpose of the tool, needs of an entity, and rights of a living being offers comical and heartfelt stories as displayed in these episodes: Before & After, Retrospect, Living Witness, Timeless, Nothing Human, Warhead. 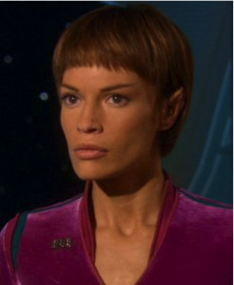 T’Pol is the Vulcan from the science academy as previously mentioned. Her role is a slight retread of Spock’s Template but delves into bridging the Vulcan wisdom of the universe with the nascent discoveries of humanity.

T’Pol deepens our understanding of Vulcans, which offers a view into what becomes  Spock’s half human, half Vulcan a century later. This female outsider is revealed in episodes The Caretaker, The Expanse, Demons, The Forge.

Outsiders on each series offered viewers a lens to discover different norms that challenged our unexamined worldviews. From the inception of the Trek Universe, founder, Gene Roddenberry had a vision of inclusion. In a 1964 memo, he shared this sentiment for a possible series:

“I Welcome you to our fellowship. You come from many lands, some from other planets. You are of various colors and creeds, yet you must and shall become a band of brothers.”

Rodenberry’s vision of inclusion is epitomized in the Vulcan Symbol (below), IDIC – Infinite Diversity in Infinite Combination. By the 23rd century, humans are a tiny minority of life in the galaxy, having only charted 11% of it.

The Vulcan Symbol, IDIC, as worn by Spock. A prescient icon for our time.

Viewing each series through a curious lens can reveal our worldviews by catching us reflexively assessing other species by human standards. We notice the Klingon warrior culture, the Ferengi mercantile ethos, and the Vulcan logical philosophy from a human perspective. Viewed as a whole, though, each species offers a lens into other ways to organize values and societies, a timely exploration.

In all, Roddenberry realizes a piece of his vision early on in 1967 as Nichelle Nichols, Lt. Uhura, was set to leave the series at the end of season two. At a NAACP event, a leading Trekkie requested to meet Nichols. It was Dr. Martin Luther King.

King revealed his pleasure at how she had developed her character: “You are our image of where we’re going, you’re 300 years from now… keep doing what you’re doing, you are our inspiration.”

When she shared that she was set to leave the series, he lost his smile and told her:

“You cannot do that … don’t you understand what this man

[Roddenberry] has achieved? For the first time, we are being seen the world over as we should be seen … do you understand that this is the only show that my wife Coretta and I will allow our little children to stay up and watch.” 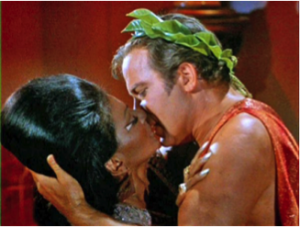 Nichols revealed, “I was speechless.” She changed her mind and remained with the series.

Even though her character was not central to the original series, its symbolism and impact were immeasurable. Historically, her role as Uhura created history by televising the first interracial kiss with Captain Kirk.

As Star Trek lives, we see the connection between art and life in science, culture, diversity, and technology. And thanks to Gene’s vision, the franchise has expanded our possibility by reminding us what it means to be human.