The Time is Right for Servant Leadership

The Time is Right for Servant Leadership

I am reposting a revised blog from February 2017, which seems even more relevant today.

A brief examination of headlines in business, government, and education reveals a focus on leadership that seems to intensify with each passing year. Over the last two decades, I’ve reviewed leadership theories, models, and styles, such as situational, functional, adaptive, generative, authentic, collective, collaborative, transformational, and authoritarian, to name a few.

Many of these offer valuable insights for our current Volatile, Uncertain, Complex and Ambiguous (VUCA) times. And it is possible to combine some of these models to develop an effective leadership profile to produce results and manage change. But the more I study, teach, and practice, the more I return to Servant Leadership as a natural model for inspiring humans to achieve together.

Servant leadership may be the most potent, personal, and public of all the models, as it has a deep history and embraces the full range of the human condition. There are passages related to servant leadership in the fifth-century Tao Te Ching, attributed to Lao-Tzu, who wrote,

“The highest type of ruler is one of whose existence the people are barely aware…. The Sage is self-effacing and scanty of words. When his task is accomplished and things have been completed, all the people say, ‘We ourselves have achieved it!'”

In modern history, servant-leaders such as Gandhi, Martin Luther King, Nelson Mandela, Mother Teresa, and the Dalai Lama have led some of our most lasting movements without any formal role or authority.

The Meaning of Servant-Leadership

Our contemporary-day use of the term servant leadership was coined by Robert Greenleaf, who worked 38 years at AT&T as Director of Management Development. He developed the world’s first corporate assessment center and was the first to promote women and Blacks to non-menial positions. He even brought in famous theologians and psychologists to speak about the wider implications of corporate decisions.

Greenleaf longed to move beyond the power-centered authoritarian leadership style so prominent in the US, and in 1964 he took an early retirement to found the Greenleaf Center for Servant Leadership (first called the “Center for Applied Ethics”).

In his 1970 essay (and published book) titled “The Servant as Leader,” Greenleaf asserted the need for a new kind of leadership model—one that puts serving others, including employees, customers, and community, as the number-one priority. His central definition of servant leadership involves a “calling,” as follows:

“It begins with the natural feeling that one wants to serve, to serve first. Then conscious choice brings one to aspire to lead.”

The test for this leadership is whether “those served, grow as persons; do they become healthier, wiser, freer, more autonomous, more likely themselves to become servants?  And, what is the effect on the least privileged in society; will they benefit, or at least, not be further deprived?” 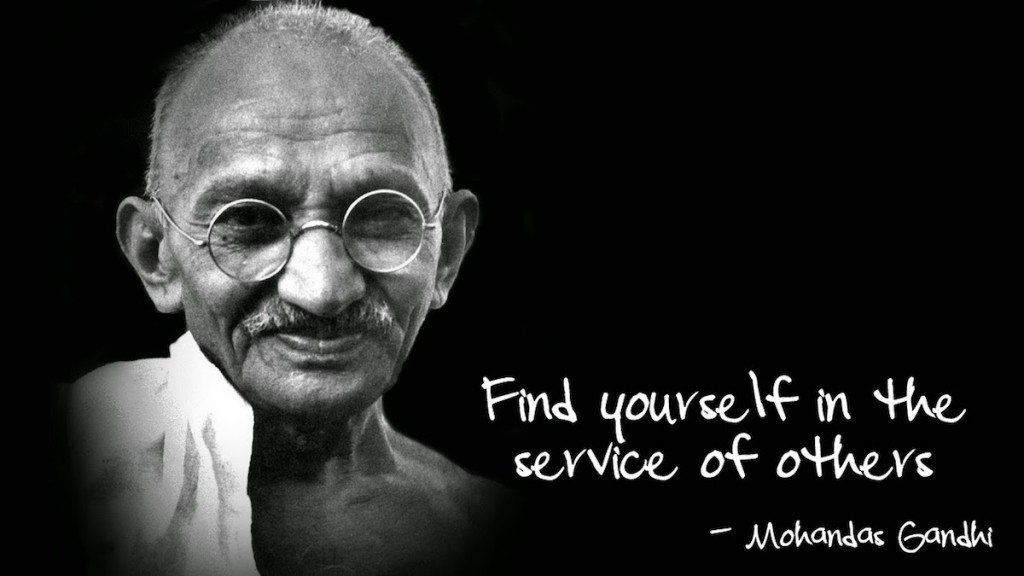 The grid below highlights the three leadership paradigms we have navigated these last three decades. View this grid as developmental; each successive paradigm grows beyond and expands to include the skills and insights of the previous paradigm. Each paradigm matched the needs and concerns of that era.

The Conventional Expert paradigm. The focus here is on external economic indicators, which worked until about 1990 when knowledge was stable and change was predictable and “manageable.” Expertise and economics drive leadership concerns.

The Change Agent paradigm emerged in the early 90’s. The fall of the Berlin wall and Soviet blockade encouraged releasing the Internet into the public domain. The Internet ushered in an era of greater connectivity, more knowledge sharing, and increased the pace of change. This shift from expertise to productivity focused on purpose and direction. This paradigm is coming to end. Performance and brand drive leadership Concerns.

The Servant-Leader/Human paradigm. The amount of life absorbed online – media, news, financial transactions, shopping, entertainment, and even culture – find us accessing and absorbing more information, daily. To leverage the pace of change and abundance of information demand greater perspective, deeper understanding, and networking across culture and platforms. This signals a shift to the human paradigm, which has always been present but often dismissed or ignored in favor of other values.

Cultural movements such as #metoo, #neveragain, #timesup, #enough can shift brand value overnight. ABC cancels its hit show “Roseanne”  hours after a bigoted tweet; Uber loses its successful founding CEO because of its toxic culture. The shift from economics and productivity has expanded to include cultural concerns to cultivate mutual understanding, collaboration, and service. Higher purpose and learning now drive leadership concerns. 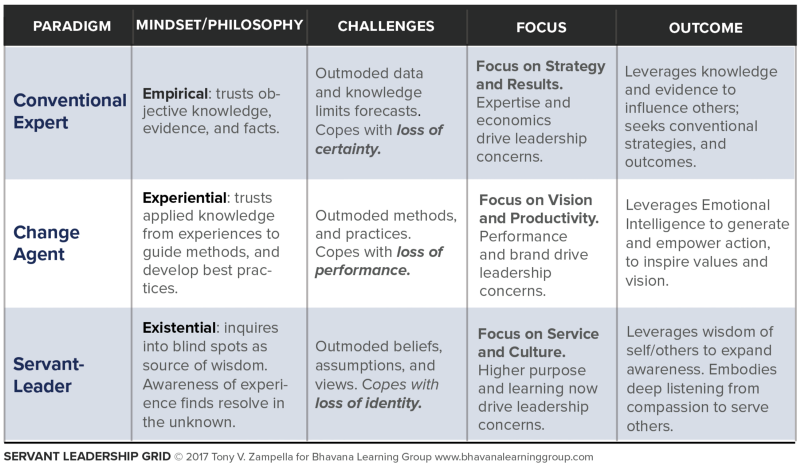 The Paradox of the Servant Leader

Lao-Tzu captures the paradox of servant-leaders: “The highest type of ruler is one of whose existence the people are barely aware …” The leader described in this age-old wisdom emulates researcher Jim Collins’ level 5 leader, possessing both humility and will.

Most, still define leadership from a position or role—not as a higher purpose, mindset, or commitment to something bigger than oneself. Many assess leaders as a personality, or trait that often demands the spotlight. But the best leaders are invisible, operating in the liminal space where paradoxes exist. As Peter Senge and Fred Koffman (1990) stated in their classic paper on learning organizations:

Developing leadership capacities in diverse people takes time. It is risky. Many resist the initiative because they lack confidence or shirk responsibility. Finding the great hero is much easier. It can produce quicker results . . . a familiar and comfortable path. Over time, people become more and more dependent on the hero leader . . . They come to expect that a great leader will save the day … As a myth of the hero leader fades, a new myth of teams and communities that can lead themselves emerges.

In his classic text, The Fifth Discipline, Senge (1990) suggests that it takes servant-leaders to cultivate learning organizations, pointing to a shared commitment and personal mastery for developing this mindset.

“Servant leadership offers a unique mix of idealism and pragmatism. At one level, the concept is an ideal, appealing to deeply held beliefs in the dignity and self‐ worth…. But it is also highly practical. It has been proven again and again in military campaigns that the only leader whom soldiers will reliably follow— when their lives are on the line— is the one who is both competent and whom soldiers believe is committed to their well‐ being.”

A 2013 Washington Post article, Servant Leadership: A path to high performance, outlined some organizations that benefit from servant-leaders, such as Best Buy, UPS, Ritz-Carlton, Whole Foods, Starbucks, Southwest Airlines, and the San Antonio Spurs, to name a few. A couple of well-known tales of servant-leaders include those of Max De Pree and Herb Kelleher:

De Pree’s leadership at Herman Miller, as expressed in his 1989 book, Leadership is an Art, emphasized love, elegance, caring, and inclusivity as central elements of management.

Herb Kelleher at Southwestern Airlines offered an eccentric approach to caring that found all workers pulling together emotionally and financially after the 9/11 attack. Workers then donated vacation days to a general pool to support workers who needed extra time to cope. This culture outlived Kelleher, who stepped down just before 9/11. Indeed, Southwest Airlines was the only major airline that didn’t require a government bailout and still earned a profit in the fourth quarter of 2001.

I must admit, the events of our current President (U.S.) continue to deepen my interest in this area of inquiry.

It can be challenging to imagine servant-leaders, especially today as we witness a self-serving President who is focused on personal gain and preoccupied with winning at all costs. Recent actions that overlook the vulnerable, embolden the powerful and avoid accountability fly in the face of leadership that serves first.

But perhaps it is against this global backdrop that we can appreciate another possibility—a 21st-century path of selfless service that enrolls humans into a higher purpose while inspiring them to grow and develop.